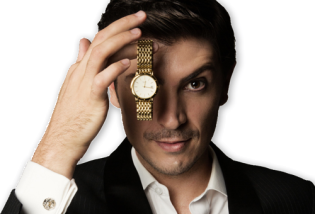 This fresh and funny entertainer stands at the front line of contemporary magic without turning his back on the golden era of grand illusionism. Adam’s original show is hilarious,  interactive, smart, surprising and non stop amazing entertainment for adults and children alike.

If you’re after entertainment that is thrilling, fantastical, and unquestionably unique, you’re guaranteed to get it with Australian Magician Adam Mada.

Mada is based in Sydney, Australia with his partner Susie and their little bundles of magic.

Mada is the current resident magician on Studio 3 for ABC 3 television Australia and Studio 10 Network 10.[13]

Adam starred in the Network Ten 2014 christmas special on Studio 10 with his famous magic drink routine. [14]

Mada appeared alongside magicians Nicholas J. Johnson and Clare Werbeloff in the 2010 series The Real Hustle for Channel 9.[15] He consulted on Sleeping Beauty, creating an illusion for the film’s opening sequence.[16] In “Binge”, an episode of ABC Television documentary Whatever! The Science of Teens, he worked with Neuroscientist John Currie Prof. John Currie to illustrate the effects of binge drinking in teenagers by applying magic techniques to memory tests.[17] During the 2012 season of reality television competition Australia’s Got Talent, Mada collaborated with choreographer Sarah Boulter on a levitation routine for her dance group Ev & Bow.[18]

Mada was invited to headline the 2014 Hoopla festival with his Mada’s Marvels show in Darling Harbour.[4][5][6] He is a founding artist of the long running El Circo Cabaret show running weekly at Sydney cabaret venue Slide now in its 7th year.[7] He has also maintained long residencies at Sydney nightspots De Nom, IVY, Tharens, The Chamber of Secrets[3] and is magician in residence at experimental cabaret show El Circo.[8][9] Mada has written, directed and performed a number of stage shows including “Mada vs. Vegas – the Duelling Magicians” at the Melbourne Magic Festival and Adelaide Fringe.,[10] He has also toured with Australian variety productions, most recently playing the character Two-Face in “The Batman Follies of 1929.”,[2] is a Headline act for the 2013 national Gangsters ball tour.,[11] Mada is playing the character Rasputin in Slides 2013 production of El circo Blanc.[12]

Do something different, with impact! Book now