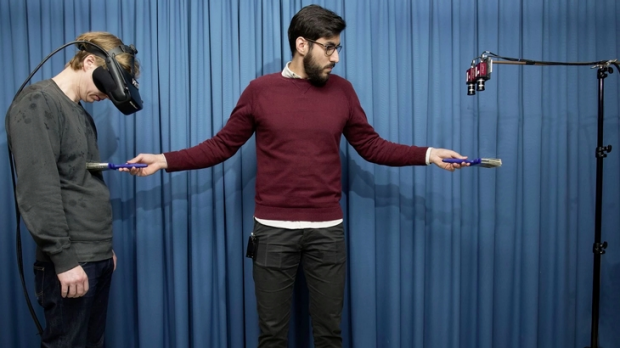 Your brain’s sense that your body is your body is something you probably take for granted. But new research shows that in just seconds, your brain will readily accept a full-body illusion as truth. Even if that illusion is that your entire body has turned invisible. And the spooky research that proves it might help develop treatments for social anxiety.

In a new study published on Thursday in Scientific Reports, a team of neuroscientists from Sweden’s Karolinska Institutet used a virtual reality rig to convince their subjects of just that.

The researchers were building on previous work where they’d induced phantom limb syndrome – the sense that a missing limb is there in the empty space – in non-amputees. In essence, the subjects were unconsciously convinced that their arm was actually in front of them and invisible when it was really hidden behind a screen. Doctoral student Arvid Guterstam, who took the lead on the latest study, describes the previous experiment here:

“We wondered if it was possible to generalise this sense of an invisible limb to an entire invisible body using the same psychological trick,” Guterstam said.

To scale-up the experiment, they put their subjects into virtual reality headsets and placed two cameras at eye level, pointing down, in another part of the room. When the subjects put their headsets on and looked down at themselves, they saw empty space where their body should have been.

But that wasn’t enough to make them feel invisible – either by their own description or through objective tests designed to trick their subconscious.

To do that, the researchers touched the subjects with large paintbrushes while making corresponding touches in the region of empty air they were looking at. So if a subject’s torso was brushed, someone would make sure they saw a brush moving at the same time and in the same direction right about where their “invisible” torso would be in space.

When the brush motions weren’t synced up, the subjects maintained their sense of self. But when they were, it didn’t take long at all for the subjects’ minds to play tricks on them. Around 70 per cent of the subjects seemed to have accepted the illusion.

“One way we tested this was to subject the portion of empty space to physical threats,” Guterstam explained. “We’d have a kitchen knife enter the field of vision and make stabbing motions at the invisible body while we measured heart rate and sweat in the subject. When the illusion had been created, there was an elevated sweat skin response, and a higher heart rate, as if their brains were interpreting this threat in empty space as a threat to their own body,” he said.

In a second part of the experiment, Guterstam and his colleagues subjected their participants to stressful conditions, like suddenly seeing a stern-looking crowd staring back at them through the virtual reality rig. Within the headset, subjects either had a mannequin standing in for their own body or just empty space, which they had been convinced via paintbrush was their own form.

“We saw that in the invisible body, there was a reduction in both the physical stress response and in the subjectively perceived stress,” Guterstam said. He hopes to follow this up in future studies, and plans a clinical test using the rig on those with social anxiety. “If it really has this stress-reducing effect, it could perhaps be used as a novel treatment,” he said.

Now that he’s sure that one can be made to feel invisible, he’s excited to see what that illusion does to the brain. Some have suggested that a sense of invisibility would make humans act less morally, because on some level they’d lose their fear of societal repercussions for their actions. That would certainly be something to keep in mind as the military works on creating “invisibility cloaks” for soldiers.

“We just want to keep figuring out how the brain works,” he said. “Considering that you’re born with a sense of your body, and have a lifelong experience of that, it’s quite astonishing that in a matter of 10 seconds the brain can be tricked into thinking you’re invisible.”