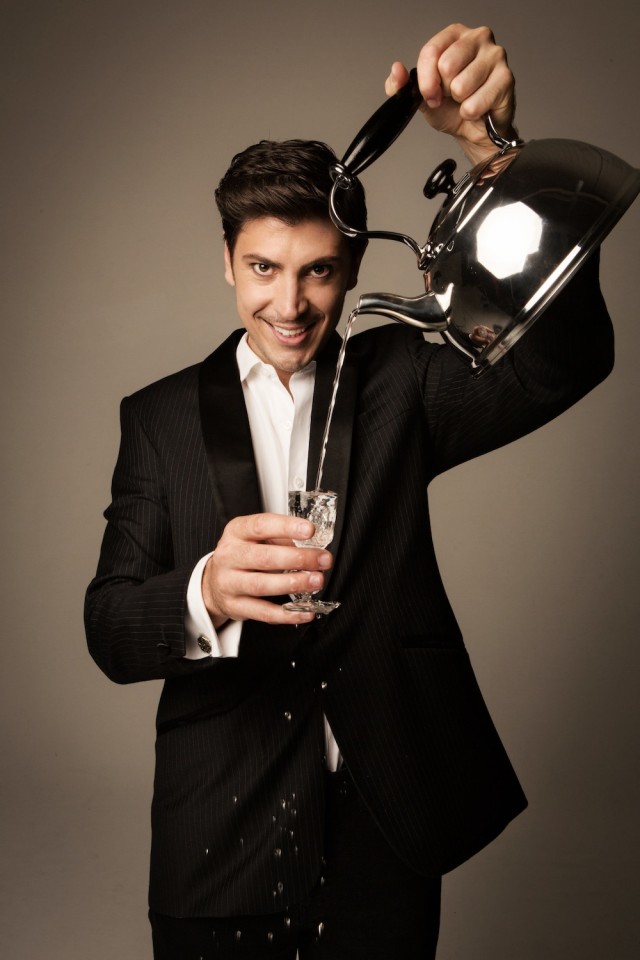 How did you first discover your love of magic? Who or what inspired you?

I grew up on a small farm just outside of Canberra. As a young boy, I loved science and pulling things apart to see how they worked. I also dreamt of exotic places and adventure, and these itchy feet and a natural curiosity lead to my interest in magic.

I certainly didn’t have any encouragement – no one in my family was involved in the arts, let alone the entertainment industry. My mother was a real estate entrepreneur and my father was a diesel mechanic, so they found it hard to comprehend my interest in being an entertainer!

I’ve just discovered recently though that my father in law’s father was a magician, which is really exciting for me! His name is Harry Rug, and he was a member of the Magic circle in London (his membership certificate is now hanging in my office).

When you were 21 you decided to pursue magic as a full-time career. What did your family and friends think?

I was working as a full-time software developer at the time and living comfortably. But I was also going out to perform magic any chance I got, and it was like I was leading a double life. I would come to work exhausted from being out performing the night before, and little things about office work really started to get to me.

I knew that I couldn’t keep living like that, but when I brought the subject up with family and friends they would actively discourage me, so it was confusing. My relationship also broke down – it was a hard time. In the end I just knew it was a “now or never” moment and I just had to take the leap. What was the worst thing that could happen?

It took my family a while to “get it”, but I now have their full support. My dad often works for me as a prop builder and roadie, and mum is an amazing business mentor and inspiration for me.

Is magic a part of your family and home life now?

It certainly is! To be honest, magic is an all-consuming thing, a bit like a madness or obsession. So one of the great challenges of being a new dad is finding a balance between home and work life.

My partner Susie is very supportive – she’s a professional TV/stage actress and has been involved in the arts all her life, so she gets it.

Our son Finn is just 2 but he’s already showing an interest in magic which is great! He follows me around the house and loves to “help dad”. Maybe I’ll put him to work soon! (Joke). It’s important for us to get away as much as possible as a family, and we try to take regular breaks as much as we can.

Do you always get asked to “do a trick” when you meet someone for the first time and tell them what you do for a living?

Yes! During my early days as a magician, every single person that I met would ask me to do a trick, without fail. I was so eager to please and practice my craft that it kind of got to a ridiculous point. I would be so prepared for people to ask me, that before I left the house (to go anywhere) I would literally be rigged head to toe with secret gimmicks. I started to feel like a cheap circus monkey.

Then I went through a stage where I got so sick of people asking me that I would refuse to perform (politely). If I later discovered that someone was genuinely fascinated and interested in magic, I might treat him or her with a surprise trick later on in the evening or day. Once they had given up entirely, as I was leaving. It would then become a really special experience for them, rather than a cheap trick it was actually like magic. I prefer it that way!

These days in social situations I try to hold off doing tricks for as long as possible. Because as soon as I perform for people, the dynamic of the relationship changes and I’m no longer just me, I’m the entertainer, and it’s impossible to go back. Everyone is then always waiting and expecting magic, which gets pretty exhausting.

Can you tell us about your most random or unexpected on-stage experience that you’ve had?

Recently I was performing on a cruise ship and had an audience member up on stage assisting me with a classic gag called the Magician’s Toast. We were both standing there, holding a glass of water, and before I could orchestrate the final magic trick he tipped his glass of water over his head for no apparent reason! It was so unexpected (never seen anything like this in 15 years performing) and absolutely hilarious – he brought the house down!

Tell us about your Hoopla show – Mada’s Marvels – in a nutshell. What can the audience look forward to?

Mada’s Marvels is a very fast-paced and interactive show. It’s built around my original creations and has a strong floating theme. There’s a great accompanying musical score using lots of electro swing, which keeps the energy high. I’m really interested in audience dynamics and participation. No one in the audience is “safe” and it’s a show where anything can happen! Be sure to bring your smart phones, car or house keys and a healthy thirst! That’s all I can give away.

Who are your magic idols or inspirations and why?

I’m really inspired by and have huge respect for my fellow magicians Penn & Teller, Ricky Jay, David Blaine, Jeff McBride and Eugene Berger (whom I studied with).  These performers push boundaries and question traditional magic practice through their remarkable, intelligent and challenging performances.

Any advice for young people who dream of becoming a magician?

Study, read, learn and travel. Good magic combines different talents and disciplines like the arts, science and performance. It can only add depth to your performance and repertoire if you’re a well-rounded person with specific interests and passions.

Finish this sentence: If I weren’t a magician I’d be a …Pilot! For sure. All my life I’ve dreamed of flying.