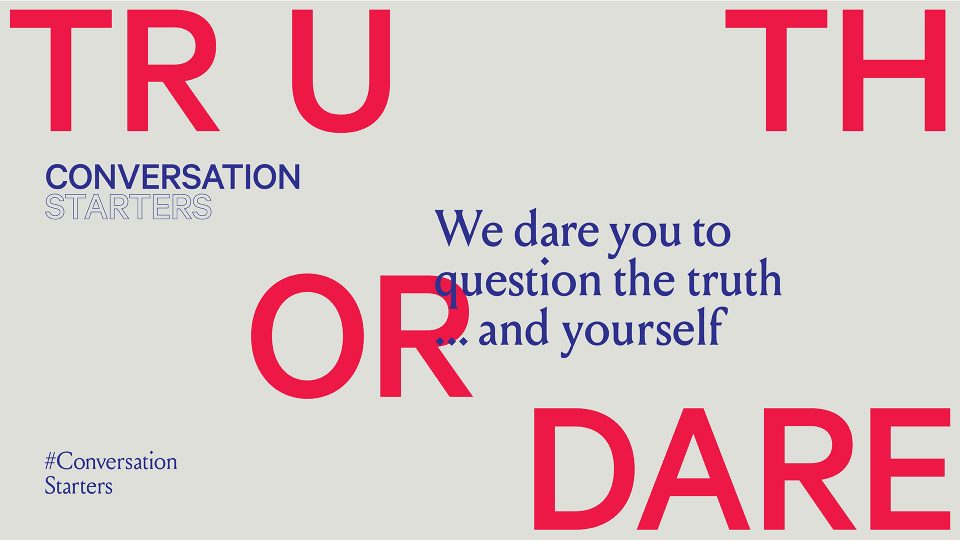 Presenting at both events this weekend.

We ask the experts to spill the beans during this lightning lunchtime talk. Learn from the masters of deception as we invite illusionist Adam Mada, comedian Michael Hing and author Felicity Castagna to the stand, sharing their secrets about fabricating a foolproof lie.

Presented as a part of Conversation Starters: Truth or Dare, a weekend of art, questions and ideas – inspired by the work of Sun Xun.

Put your senses to the test as Fresh Catering Executive Chef Jason Burrows whips up delectable concoctions that defy the culinary norm. Eclairs and ganache are not relegated to dessert on our menu – prepare for deluxe savory pastries and a main course with a twist.

Fire up your mind and your tastebuds as your regular dining experience is switched up at our communal table on the MCA Sculpture Terrace paired with the sweeping backdrop of Sydney Harbour.

Each course will be matched with a glass of wine and a provocateur – someone to will stir up a discussion about what truth means today. Together, we’ll ask, “What does truth mean to you?”

*Vegetarian option available. For any other dietary restrictions, please contact us prior to booking your ticket.

Presented as a part of Conversation Starters: Truth or Dare, a weekend of art, questions and ideas – inspired by the work of Sun Xun.

About the special guests

Adam Mada
As one of Australia’s leading magicians and magic/illusion consultants, Adam Mada has almost 20 years of experience creating, teaching and performing original magic and illusions for live theatre, events and screen. He frequently collaborates with artists, theatre makers and authors, and is a favourite across multiple television networks and a regular guest on both Studio 10 and ABC.Mada is the founder and director of Magic Inc, a company that creates bespoke custom magic effects and performances for advertising and special events. Magic Inc also fosters emerging magic talent, including Australian and New Zealand junior champions The Cardistry Boys, who were discovered by Mada in 2010.

Giselle Stanborough
Giselle Stanborough is an intermedia artist based in Sydney. Her works combine online and offline elements to address how user-generated media encourage us to identify and perform notions of self, and the relationship between connectivity and isolation. Motivated by a curiosity in the increasing indeterminacy between the private and public spheres, Stanborough’s work often addresses contemporary interpersonal experiences in relation to technology, feminism and consumer capitalism.Her work has featured in the Washington Post’s ‘Pictures of the Day’ and has been shown at major venues such as Australian Centre for Contemporary Art (ACCA) and Museum of Contemporary Art Australia (MCA), and she recently participated in international performance series BLOCKUNIVERSE, London. Upcoming exhibitions include Robot Love at Capina Melkfabriek, Eindhoven.

Dr Simon Langstaff
Philosopher Dr Simon Longstaff runs a thought experiment to test whether you feel truth should always be upheld above anything else. As the executive director of The Ethics Centre and co-curator of the Festival of Dangerous Ideas, Simon has been working closely with people of diverse thinking, ethical viewpoints and different interpretations of truth for decades. He has also been made an officer of the Order of Australia.