Just quietly this is amazing ! Also my new favourite word is “Promulgated”

The resolution is aimed at recognizing “magic as a rare and valuable art form and support efforts to make certain that magic is preserved, understood, and promulgated.”

Recognizing magic as a rare and valuable art form and national treasure.

Whereas magic is an art form with the unique power and potential to impact the lives of all people;

Whereas magic enables people to experience the impossible;

Whereas magic is used to inspire and bring wonder and happiness to others;

Whereas magic has had a significant impact on other art forms;

Whereas magic, like the great art forms of dance, literature, theater, film, and the visual arts, allows people to experience something that transcends the written word;

Whereas many technological advances can be directly traced to the influential work of magicians;

Whereas futurist Arthur C. Clarke claimed that any sufficiently advanced technology is indistinguishable from magic;

Whereas one of the greatest artists of all time, Leonardo da Vinci, was inspired by magic and co-wrote one of the very first books on magic in the late 15th century;

Whereas modern cinema would not exist today without the innovative work of the accomplished magician Georges Méliès;

Whereas magicians are visual storytellers who seamlessly interweave elements of mystery, wonder, emotion, and expression;

Whereas magic is an outstanding artistic model of individual expression;

Whereas magic fulfills some of the highest ideals and aspirations of our country by encouraging people to question what they believe and see;

Whereas magic is a unifying force across cultural, religious, ethnic, and age differences in our diverse Nation;

Whereas magic is an art that transforms the ordinary into the extraordinary;

Whereas the American magicians Harry Houdini and David Copperfield have been the most successful magicians of the past two centuries;

Whereas David Copperfield, introduced to magic as a boy growing up in New Jersey, has been named a Living Legend by the Library of Congress;

Whereas David Copperfield, with 21 Emmy Awards, 11 Guinness World Records, and over four billion dollars in ticket sales, has impacted every aspect of the global entertainment industry;

Whereas David Copperfield, through his magic, inspires great positive change in the lives of Americans;

Whereas people consistently leave David Copperfield’s live magic show with a different perspective than when they entered;

Whereas Rebecca Brown of Portland, Oregon, left a David Copperfield magic show with a newfound inspiration to pursue her lifelong, unfulfilled passion for dance;

Whereas programs such as Project Magic, created by David Copperfield, use magic as a form of therapy for children with physical, psychological, and social disabilities;

Whereas learning magic through programs such as Project Magic can help these children improve their physical and mental dexterity and increase their confidence;

Whereas learning magic through programs such as Project Magic helps these children realize that they are no longer less able than their peers;

Whereas programs such as Project Magic teach these children that they are more capable and have a newfound ability to do what others cannot;

Whereas cities such as Wylie, Texas, and its mayor, Eric Hogue, recognize and promote the art of magic with official proclamations, summer educational programs, and the first festival dedicated to the art of magic in the State of Texas;

Whereas Mayor Eric Hogue, who learned the art of magic as a child, continues to use those skills to teach elementary school students about the different roles and responsibilities of local government;

Whereas magic is timeless in appeal and requires only the capacity to dream;

Whereas magic transcends any barrier of race, religion, language, or culture;

Whereas magic has not been properly recognized as a great American art form, nor has it been accorded the institutional status on a national level commensurate with its value and importance;

Whereas there is not an effective national effort to support and preserve magic;

Whereas documentation and archival support required by such a great art form has yet to be systematically applied to the field of magic; and

Whereas it is in the best interest of the national welfare to preserve and celebrate the unique art form of magic: Now, therefore, be it

Resolved, That the House of Representatives—

(1) recognizes magic as a rare and valuable art form and national treasure; and

(2) supports efforts to make certain that magic is preserved, understood, and promulgated. 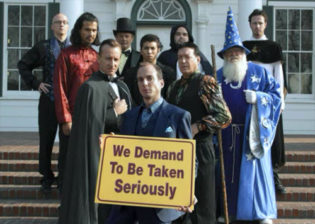