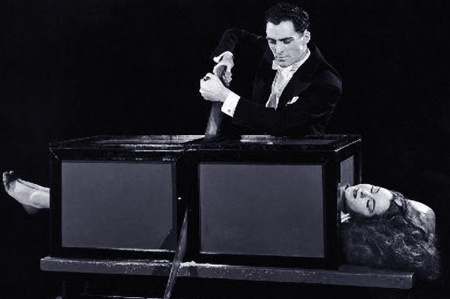 Chuffed to be mentioned in this timely article in LIP magazine.  For magic to evolve past it’s dusty stereo types we need more women involved in every level of magic, from performing to creating to producing.

Hollywood blockbuster, Now You See Me 2, features a boisterous and strong female illusionist by the name of Lula, a well-established magician standing proud amongst her male cohorts. The coin has flipped and this time the woman in the film is not the sexy assistant donning a sparkly leotard and feathers. Instead she is the magician, confident in her performance.

As the magic industry slices past the image of the suave male magician pulling rabbits out of top hats and sawing women in half, it seems only right to include a female character in the film to encourage more diversity. So when Lula turns up in her leather jacket, announcing that she is the ‘horsewoman amongst the horsemen’, we get a glimpse of how few women there really are in magic trade.

In Australia, you can count the number of prominent female magicians on one hand. Lee Cohen, Cath Jamison and Rosanna Maccarrone are three gutsy female magicians, shattering the stereotypes of this male-dominated industry.

Cath Jamison is Australia’s only female mentalist and has been a magician for over 20 years. She started playing with magic at age five when she was given a magic kit, which was essentially tailored for boys to learn magic.

‘I had a magic kit and it was called The Boys’ Book of Costuming. All the girls’ books were about knitting and horse riding at the time and that was my book,’ she recalled.

Today, Cath does not fit into the cookie cutter image of the traditional woman in magic. She can be seen swallowing razorblades and balls of fire and she regularly uses male assistants in her act, reversing gender roles and the idea of the subservient female assistant. When she first started out in magic, she dressed as an old man in her performances and would emerge out of the costume in a Spanish bra. She said her message to the men in the audience was that ‘times are changing, boys. Women are bursting out this stereotypical sort of form’.

Second-generation magician, Lee Cohen, also began magic at an early age, becoming a magician’s assistant at age eight after her father taught her some tricks. Lee, who now runs Just For Girls magic classes, was the only young female in the magic lectures she attended growing up. In these Hogwartian lectures Lee was a Hermione of sorts, but instead of being able to sit and learn magic tricks like her male cohorts, she was constantly pulled on stage as the unwilling volunteer.

Much like Cath, who acquired her magic from boys’ magic kits, Lee recalls the difficulty of learning magic tricks that were designed for men.

‘The tricks will say something like, “put the cards in your right trouser pocket” and if you’re a little girl wearing a skirt with no pockets, you don’t necessarily have the ability to think those things through when you’re under 10 years of age. Being able to change the trick and know that it will still work the same way, that can be very challenging for a young female magician,’ Lee explained.

This is a common barrier that female magicians are forced to leap over. Even Rosanna Maccarrone, a seasoned magician, once went by the title Rainbow the Clown and when she first started out in magic, she wore a paper face mask because she was ‘too self-conscious to perform’ as herself. She recalled her first magicians ring in Brisbane when she opened the door to a room filled with men. Met by a sea of male heads, she was only welcomed inside after one of the magicians acknowledged that he knew her.

With the magic world being what many would call a “boys’ club”, women are often locked out of the industry. ‘The environment is not necessarily appealing to a lot of females. When you get into a room full of people that you really don’t relate to, it’s not an environment that you stay in,’ Lee said.

Female magicians are also burdened with an expectation to dress in a particular way. And with females only just starting to come into their power as the magician, Lee has found that ‘the image of the female assistant is burned into people’s minds.’

‘There is definitely pressure and expectation to adhere to what magazines tell us is pretty… particularly in magic because the image of the female is still what people would think of as the magician’s assistant,’ Lee said.

Male magicians such as Adam Mada, who is ABC3’s resident magician, are also speaking out against the patriarchal nature of the industry and calling for more women to be encouraged to pursue a career in magic. Adam said that often, magic tricks like sawing a woman in half are inherently violent towards women, encouraging male domination and female submission, with some props being ‘almost like mutilation devices’.

‘If you can think of any magician’s illusion or trick on stage, generally it’s a lady getting sawn in half, it’s a lady being stabbed, or being cut up into lots of little pieces. It’s all quite mutilation based and it’s about the male magician having power over the female assistant, which when you really break it down, it is horrific,’ said Mada.

Stubborn elements of sexism continue to disadvantage women in the magic industry and it is time that we support a different narrative than the dark haired man wearing a top hat. If you search the Internet for magic tricks, you will be met with images of horizontal women under the teeth of giant saws and without context, these tricks could easily appear like horrific pictures of medieval torture. Somewhere, seated in one of those plush red cinema chairs, will be a young woman watching Now You See Me 2 and for the first time, she will see a female illusionist on screen. Instead of being sawn in half or stuffed into a box for an audience’s sadistic entertainment, she could be the magician and not the mute sidekick. Whether it brings razor-swallowing magicians or magic clowns, we need more women like Cath, Rosanna and Lee to make magic.