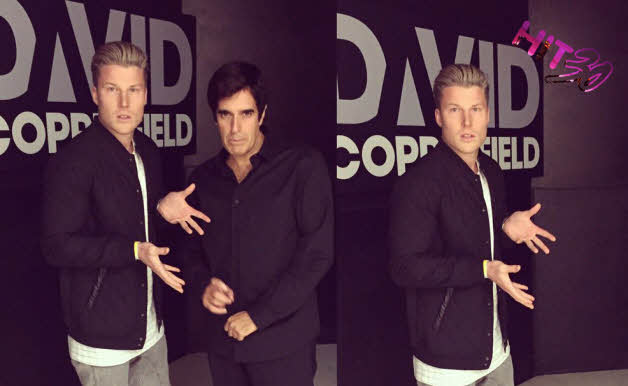 I was challanged by Australian national countdown radio network The Hit30 / 2dayfm to teach a trick  to host Angus O’loughlin, who was on a mission to perform and fool David Copperfield backstage in his own theatre.

It was an incredible task to undertake. Angus had never performed magic and David Copperfield is the greatest Magician and one of the highest paid entertainers in the world with over 3 billion in ticket sales to date.  David is hugely passionate about magic and has been at the forefront of magic development for well over 30 years, not to mention being surrounded by a team of the best magic consultants money can buy.   No pressure……

I had less than 24 hours to create the trick, 12 of which I spent paralysed with panic.  A big shoutout to my creative team including Australian legend Tim Ellis for brainstorming some cheeky ideas. Once I hit on a winner, I worked non stop for 8 hours to create an elaborate magic kit to perform the perfect fool proof trick………..It worked.

Angus did an outstanding performance! He even though it was a simple ‘pick a card’ trick every single element of the performance was designed for deception.

Full radio program and Video below.

Check out all the action on 2dayFM.